How Not To Handle Politics 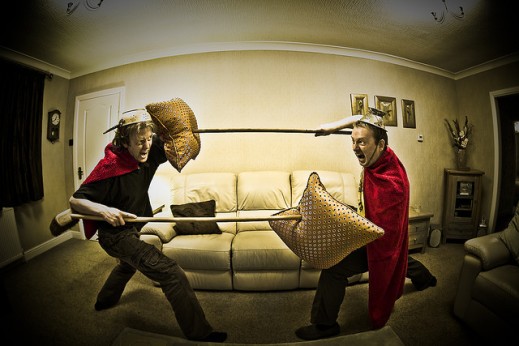 I seldom wax political, but in light of the impending election, and the gross amount of vitriol dripping from the social media machine, I have decided to toss my hat in the ring and offer a simple How-Not-To list. A penny for your thoughts…

1. Make politicians into 2D caricatures of themselves.

These days, we rely on soundbites and smear campaigns to inform our decisions. This reduces candidates to cardboard cutouts on which we pin medals or throw darts. We strip them of all humanity and nuance, but people are more complex than that. We know this of ourselves. We hate to be painted with broad brush strokes, but that is exactly what we do to politicians.

Spend a little time with fact checking. Research voting histories and career track records, and avoid placing blind trust in the mainstream media. If your assumptions are confirmed, vote accordingly, but don’t cast your ballot based on the emotional appeal of a thirty second commercial.

He’s either the savior of the world or the devil in flesh… My vote will decide! – Jonathan Martin (on voting logic)

Looking at the Internet, it is hard to locate middle ground. The candidate is either the hope of the world or its ultimate destroyer.

For some, Obama is the love child of Oprah and Captain Planet—Clean air for everybody! And you get a car, and you get a car. For others, he is a closet Muslim Socialist working on a plan to provide every female citizen with an in-home abortion kit.

Some herald Romney as the man who will single-handedly bring God back into America, and money too, lots of it. God and bags of cash. To others, Romney is the tax-evading tycoon in magic underpants, itching to turn America into a business he can sell overseas while his Mormon buddies baptize the dead on the White House lawn.

These men are neither Satan or Savior. Like us, they are bundles of animate flesh with strengths and weaknesses, dreams and good intentions. No politician will ever bring perfect peace to the planet or stop it from spinning, for that matter. Hostility thrives in extremes. This is why so many of our political discussions become contentious debates. Both sides should strive for a measure of objectivity.

Christians, we need to stop saying this. “I vote for Jesus.” He isn’t running for President. Although, it would be kind of hilarious. Can you imagine being the person running against him?

“I will make sure every American is provided with quality healthcare.”

“Jesus, let’s give you a chance to respond.”

“I cure cancer. I’ve also brought people back from the dead, self included.”

Landslide victory. Jesus is not a candidate you can vote for. The Bible calls him the Kings of Kings and Lord of Lords. He isn’t interested in lending his voice to politics, and while God blesses America, He does check in on other nations occasionally. He rules a subversive kingdom not of this world. He isn’t Republican or Democrat. He doesn’t fit in any of our categories. Our call is to serve him faithfully and treat others respectfully, especially those with alternate views.

We are voting for a human being on November 6th. We would all do well to remember that.

Want more [theo]culture? Click the link at the bottom of the page to subscribe and receive new posts via email. No spam. I promise.